“Serving in the spirit of the sons of Issachar, we try to understand the issues the young generation in Romania faces and to meet the need to equip parents, pastors and youth leaders who minister to this generation.” This was the wording of the invitation we sent to those who attended “Beyond Belief” Conference in Sovata, on April 10-11, 2008,  a conference organized by BIG Impact in partnership with Josh McDowell Ministry. 560 people from 79 cities chose to respond to the invitation, thus being directly exposed to the teaching of the well known American Christian leader, on his third visit to Romania. Among the attendants there were many pastors and youth leaders, representing the whole specter of the evangelical denominations, and also parents interested in a healthy relationship with their children, as well as a counselor of an orthodox bishopric, who had expressed his interest in attending this event. 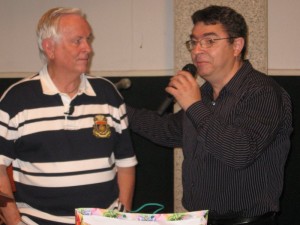 Josh McDowell, the initiator of the “Beyond Belief” campaign in the USA, came to share with us the results of a professional survey done by his organization in Romania, and to explain to us how  chose to respond to the ideological challenges the American youth are facing. Josh’s conviction is, “if we are not doing anything now, we may risk loosing an entire generation: your kids and my kids.”

Therefore, the purpose of this conference was understanding the ideological stream in which our teenagers are swimming nowadays and launching a dialog about the direction we should head towards, in order for us to be a much needed help for parents and to be able to provide a life buoy for teenagers, and also to teach them to swim against the flow of this world.

The most powerful and motivating moments were those when Josh shared from his experience as a father, how he invested in his children developing a strong relationship with each one,  although he traveled a lot throughout the world and was extremely  busy with his ministry and the writing of his books. Comparing this with the hard reality of Romania, where statistics show that teenagers from Christian homes spend an average of 8 minutes a day with their parents, while 40% of the parents, sadly, spend less than 2 minutes a day with those to whom they gave life. This harsh reality generated in each parent who was present at the conference a compelling  feeling that they should rethink both their priorities and their relationships with their own children, if they want them to be as immune as possible to the self-destructive tendencies children are so vulnerable to, when they do not have a good relationship with their parents, especially with their dads. 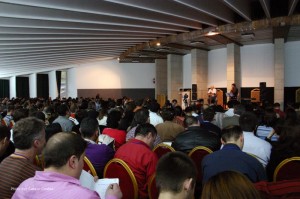 Another important thing Josh emphasized during the conference was the importance of offering a coherent explanation for what we believe. One of the major drawbacks of contemporary Christians is that they are not able to explain why they believe Jesus is The Way, and not one of the many other ways, although we have enough information to prove our faith, information that we should use when we have to explain our faith to others. In nowadays’ context, when Europe is  converted more and more to Islam, Christians have to be ready at all times to be accountable for their hope and faith, claims the well know apologist from the USA. That is why, surprisingly, after an ad-hoc survey done by Josh McDowell among the participants, where most of the participants gave hesitating and unconvincing answers about the reason for their faith in the Bible and in Jesus Christ, he changed the focus of his final message, offering us an apologetic message meant to give a correct perspective and the right tools for us to be able to affirm the truthfulness of what we believe in, anytime.

Due to the high quality information, the very important themes and the communicator’s ability to convey the message, truly this “Beyond Belief” conference was “Beyond Expectations” for most of the participants.

To conclude with, here is some feedback from this conference:

Mihai Dumitrascu, pastor, from Galati: The Josh McDowell conference was a revelation for me. I have been extremely challenged about my relationship with my kids and, of course, my responsibility as a parent. I have been literally overwhelmed by Josh’s enthusiasm when addressing his audience, which really gives force to his message. I return home with the decision to make changes in my daily schedule so that I will be able to give more time to my family. This time will remain as a milestone conference in my life.

Doru and Nadia Cirdei, from Chisinau, Moldova: We have read with excitement Josh McDowell’s books and regarded them as reference materials, ever since their first publishing in Romanian. But  meeting the author meant for me and my wife a true and challenging inspiration, specially because it is not too late for our family and ministry to go through a “revolution” that will hint at saving the generations to follow. We are convinced that both the organizers and Josh McDowell were inspired to organize this conference and, no doubt, many lives have been transformed and will be transformed on a long term. May God bless you abundantly!

Catalin Croitor, pastor, from Suceava: Thank you, BIG, for making this possible! Thank you, Josh, for being with us, making all these things so real! Thank you, God, for speaking to all of us.

Andreea Burian, from Navodari: We thank you for the Josh McDowell conference and for the above-reproach organizing. May God make it possible for us to have many other conferences like this, and to you, the organizers, may God give you the power to continue to do his ministry, with the same excellence! I have literally absorbed each word shared and all that was said has had powerful echoes in my life. I have learned new things which I am determined to apply to my life and I was touched by God’s Spirit in a special way. Josh was extraordinary, just like I expected him to be – I appreciate the commitment and the professionalism of those who spoke, and many other things. To cut a long story short, excellent organization, excellent accommodation, and the messages were above all  excellent.

Cristi Voaides, from Tg.Mures: God has touched my heart through this conference in an incredible way, especially regarding the topic of relationships. I now have a new understanding and an increased desire to build relationships, like never before. Thank you for this very important part of the foundation of life and ministry.

Adi Totan, pastor, from Timisoara: I met Josh in 1990, at the student conferences held fro two days in Timisoara, at the Olimpia Hall, and at the professors’ conference in Aula Magna, at the Universitatea de Vest (i.e. the largest state university in Timisoara). Although 18 years passed by, I have noticed  very few changes, and those only in Josh’s white hair.. Otherwise, I have discovered the same passion for Christ, the same warmth in personal relationships, and the same apologetic fervor when addressing young people’s issues. My confirmed-once-again image of the past was completed by a Josh in a husband-and-father role. Knowing the magnitude of the first model, that of a Christian author and speaker, the second one, that of a husband-and-father model, has charmed me, has filled me with enthusiasm and has challenged me to tears. It has been so impressing!

I could  tell Josh that, 18 years ago, at his messages, my wife-to-be at the time accepted Jesus into her heart, and now, after the messages at Sovata, my wife has a more dedicated husband to her and to our children.

Thank you, organizing team, for your vision and an excellent organization.

This site uses Akismet to reduce spam. Learn how your comment data is processed.

For Email Newsletters you can trust